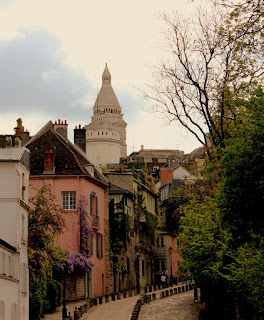 Sometimes the best things about a city are the things we simply stumble upon. Finding something out of the ordinary, something beautiful as well, is treasure indeed.

It's easy to miss, this little vineyard tucked away on top of Montmartre, almost in the very shadow of Sacré-Coeur. Most tourists pass by without much thought, but not your faithful scribe. 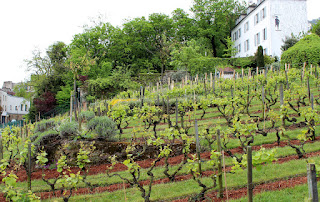 Vineyards have flourished on Montmartre since the Romans built a temple here dedicated to Bacchus, their god of wine. An abbey was established on the hill in the 12th century (and we know what they were making) but it was destroyed during the Revolution. The vineyards were spared, which tells us a minor detail about the Revolution. 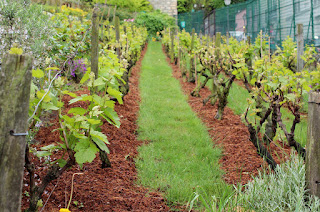 In the first part of the last century the area was almost the victim of property developers, but spared again, this time by resourceful artists. Now funded by the Mairie de Paris, or the city government, what is left of the vineyard only covers slightly more than 1500 square metres, and yields about 750 litres of gamay and pinot noir annually. Most of the wine is auctioned for local charities and is considered, according to my information, "decent" by critics. In other words, sale of the wine goes to a good cause. 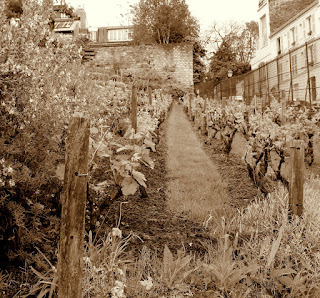 Not much of Clos Montmartre makes any sense. It's on a steep slope to be sure, but facing north, which is wrong of course. Surrounded by nice bourgeois houses and apartments, and tourist buses and throngs of humanity eating hamburgers and fish and chips, and all the attending pollution that brings, a vineyard here seems even more improbable. In other vineyards roses are planted at the end of rows (as an early warning system for disease or insects), here we find lavender bushes and forsythia, daffodils and even pansies. Yet, this a beautiful vineyard by any definition, and it works.

So. How to get here: Assuming you've come to see Sacré-Coeur, go round the west side of the basilica (you know, that almost-Islamic looking thing you came to see), into rue Cortot, past the Musée de Montmartre and into rue des Saules. A large view of the northern suburbs will appear. Look right and slightly down. Of course you could approach the vineyard from the north and then these directions will be useless. Best to look at a map, but don't make it a habit. You might otherwise never stumble upon things like Clos Montmartre.