Give us this day our daily croissant 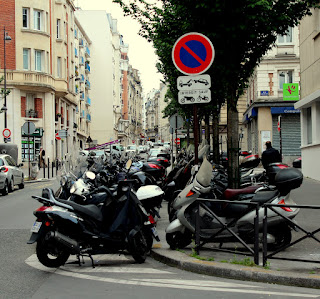 Before the motorcycle riders start their engines and wake up the neighbourhood...

Before the children make their way to school... 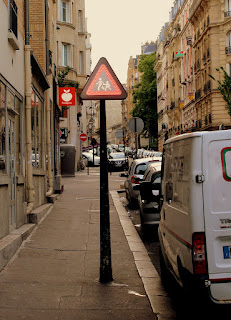 Before the creative parking of the night before is noticed by too many people... 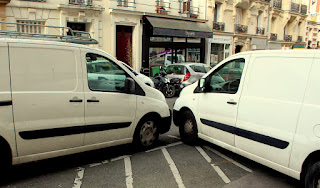 And certainly before the shops open and the rush to work begins, many of us are out to our favourite boulangerie for our daily baguette and croissant. 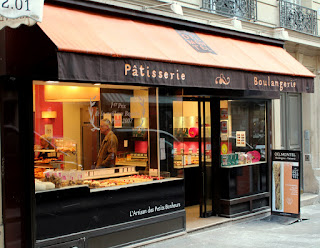 Everyone seems to have a favourite boulangerie. In our case it is the Arnaud Delmontel on rue Damrémont. It is one of four stores operated by Monsieur Delmontel and each is open every morning at 7:00. There are boulangeries that are closer to our place, but this is by far the best. There is often a queue early in the morning and the croissants have been known to sell out before 9:30.

Largely associated with France, croissants actually originated in Austria as something called the kipferl, possibly dating to the 13th century. Some people consider the rugelach to be a form of the the kipferl. In any event, the kipferl was modified to a plainer form, again by the Austrians, sometime in the mid-1800s. At about the same time it was adopted by the French who gave it a standard shape and its name. At Delmontel, the croissants are light and flaky yet crispy on the crust. 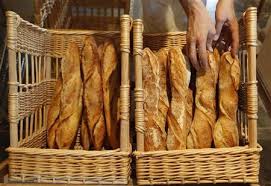 The baguette meanwhile is a staple throughout the day and again considered one of the symbols of French culture. The word itself, in reference to this type of bread, didn't really appear until the early 1900s.  Baguette means wand or baton and through history they have varied in length (sometimes reported to be 2 metres long). 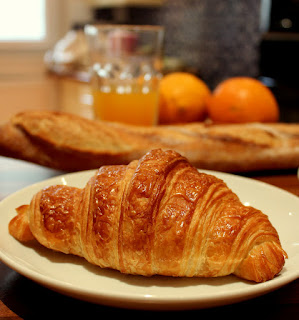 Freshly squeezed orange juice, a heavily buttered piece of baguette, or a croissant, every morning seems very Parisian. I'm getting used to this.