It's difficult to dine in Montmartre. Within the shadow of the Islamic-inspired dome of Sacré-Cœur, most restaurants are committed to full-on fish and chips and burgers, or providing some weirdness of what they perceive the normal tourist expects in French dining: onion soup, escargot, etc. Which is true of course, but it doesn't seem to exist anymore except in a twisted tourist version. It, the French version of what they think we want, fails horribly sometimes and expensively, and in Montmartre's tourist districts that can be disappointing indeed. 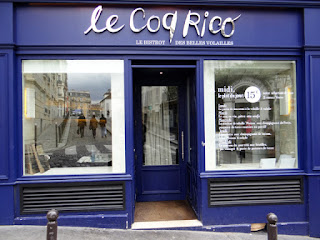 New things are happening in French restaurants of course, and three examples are found along the long and winding rue Lepic in Montmartre. One is exceptionally busy with locals and tourists alike, though I can't imagine why. 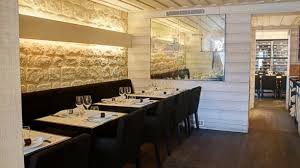 It's called Le Coq Rico and it serves chicken. And that's about it. Oh, there are a few other dishes thrown in to confuse matters, like guinea fowl and pigeon, but it's basically chicken and mainly roasted chicken at that. Good, maybe even really good, but we grew up with roast chicken on Sundays made by Mom, and we don't need to pay an arm and a leg for it here in Paris. Do we? Well apparently we did and that's why I'm warning you. 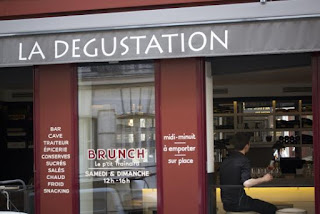 Another new-style resto-bistro-bar, or whatever they might want to call it, is La Dégustation, and it shows great promise. A variety of open wines and champagnes are offered by the glass, offering an easy way to try different wines with different dishes. The food dishes are prepared simply in an open kitchen in view of diners with fresh ingredients and all that stuff. Again, a great concept: French cuisine re-invented for a new generation.

However, when we dined one night, service was distant and confused. For a place that promotes a great selection of wines, our two servers were unsure of what to suggest with the different dishes and more concerned with pouring only the absolute maximum of 20 cL into each glass. The potential for fun and interaction between server and customer was lost entirely. The food was nicely prepared and presented, but not particularly exciting. Bland comes to mind, and La Dégustation wasn't fun, though it's modern-bistro layout would suggest some sort of revelry. 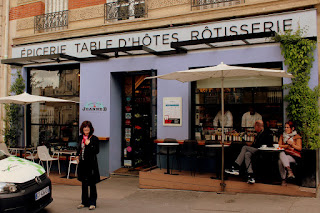 Our third candidate along rue Lepic is a place called  Jeanne B. Similar to La Dégustation with a nice selection of wines, an open kitchen concept, fresh and in-season ingredients and a menu that changes from day-to-day depending on what is available. Jeanne B succeeds. In fact, it succeeds impressively with friendly and competent servers and an impressive kitchen crew. 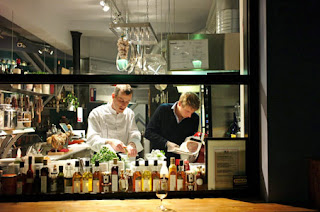 Our waiter, we visited twice and he served us both times, always had great recommendations for wine, and after allowing us to taste the wine before pouring, he sloshed it into the glass, offering a smile and his reasons for loving that particular grape. Customer service isn't all that difficult when people enjoy what they are doing and have some fun doing it. 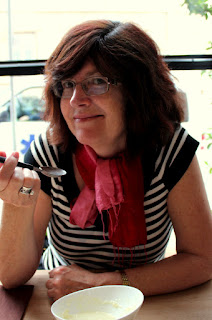 The food at Jeanne B is wonderful. Some might consider it expensive for the portion size, but when considering the ingredients and the wonderful range of flavours hitting your mouth, it's a bargain! There is almost always a veloute de jour, a cold puree that's light and creamy, and highly recommended. The menu is brief and always includes a vegetarian option as well as some twists on meat, seafood and poultry. No onion soup here. Jeanne B has its act together; it doesn't pretend to be something it isn't, and it appreciates its customers. There are some tables outside and it's great to sit along the cobblestone street and watch the people go by. Jeanne B is not fine dining with white table cloths. It is adorable, charming and unpretentious. After wandering around Sacré-Cœur, it's an oasis of simple pleasure for une parisienne like Sherry.

Photos of Jeanne B by Jim Murray, others courtesy the restaurants' websites. Copyright 2015.
Posted by Jim Murray at 09:18