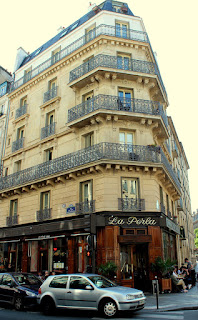 Le Marais is one of the trendiest areas in Paris and it holds a number of buildings of historic and architectural importance, plus lots of galleries and shops.

I tend to think that the Marais starts at a Mexican resto-bar called
La Perla. We stayed a few doors down from La Perla on our last visit and discovered their Happy Hour to be one of the best values in the city. 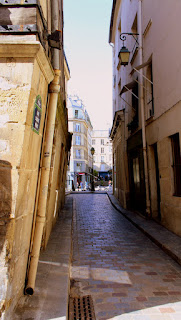 Your walk in the  Marais could start with La Perla, or it could start elsewhere too as it spreads through much of the 3e and 4e arrondissements, from the Seine to Place de la République, and from Place de la Bastille to the Centre Georges Pompidou. It is a wonderfully diverse community.

It's also an area filled with old buildings, narrow streets and alley ways that remind us of a time long ago. The building below was originally built in 1508 and restored in the 1960s. 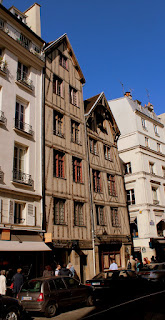 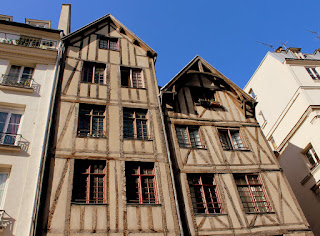 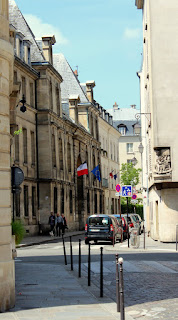 Previously an area for the wealthy class in Paris, the nobility left for better digs at the end of the 19th century. From then and through the first third of the 20th century the Marais became a vibrant collection of Jewish neighbourhoods as East European Jews flocked to Paris. That changed of course with the occupation of Paris by the Nazis and with the complicity of the French government and people of the time. 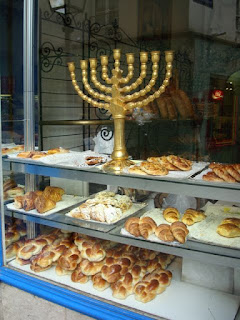 Since the 1990s there has been a resurgence of Jewish life in the Marais. That growth has faltered with recent attacks on Jews in Paris and throughout France. An alarming statistic that came up in an article by Jeffrey Goldberg for the April issue of The Atlantic, refers to France's 475,000 Jews, amounting to less than one percent of the nation's population, yet, according to the Interior Ministry, 51 percent of all racist attacks targeted Jews.


The Jewish neighbourhood in the Marais revolves around rue des Rosiers, and it is a wonderful area in which to wander. Bagels can be found, bookstores, Kosher food stores and restaurants, and assorted other shops and services with obvious connections to the faithful.

A synagogue built over 100 years ago is near rue des Rosiers, and the Mémorial de la Shoah , its library and bookstore are nearby as well.

The area is heavily policed, and the sight of camouflaged military men and women strolling the streets while carrying machine guns, and appearing to be ready to use them at any moment, can startle if you aren't prepared (and we were never prepared). 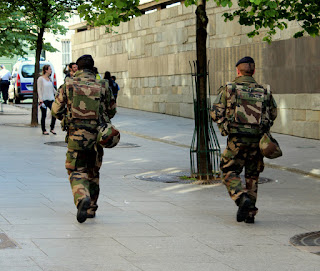 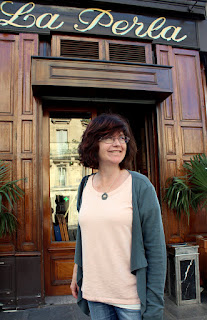 In recent years the Marais has become popular with artists, designers and shopkeepers. Upscale fashion houses have set up shop along side local artisans. Tourists come to the Marais in large numbers for the shopping, the galleries and the scene, but people live here too. Since the 1990s the Marais has become a centre for the LGBT community, as both a place to live and to do business, as evidenced by many gay cafés, nightclubs, cabarets and shops.

It's a wonderful mix of old and new, faith and pride, art and rampant commerce that makes the Marais a great place to visit. And you can always end your walk back at La Perla for the best margaritas in Europe.