Selling knock-off trinkets is a problem of exploitation 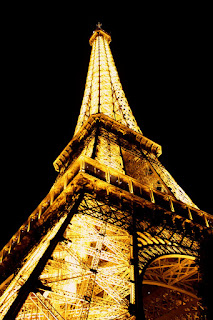 Today, in a rare occurrence, the Eiffel Tower was closed to the public for seven hours because workers went on strike to complain about the scourge of pickpocket-gangs at the site. Normally the tower is open every day of the year, except in cases where police receive information about potential threats.

Our experience at the Eiffel Tower, and at other major attractions in Paris, does not offer much; we were wary of the potential of pickpockets, but never saw anything to concern us beyond taking precautions that would apply in any city. 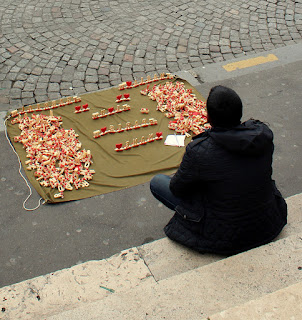 What we did see at various sites, including the Eiffel Tower and Sacré-Cœur, were tens and tens of men selling trinkets, baubles and beads. That they might be involved as pickpockets is unknown to me; that they are part of a larger problem of exploitation and criminal activity is much clearer. 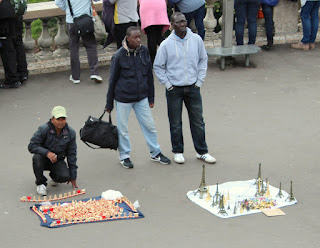 According to a Reuters report, Chinese gangs import trinkets from China and then sell them to other groups who control the sellers. The sellers are usually migrants from India and parts of Africa and they work without proper licenses and certainly without proper pay, selling knock-off merchandise that undercuts legitimate business operators who sell licensed merchandise, pay taxes and wages. 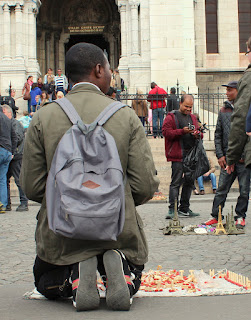 According to Reuters, up to 400 black-market sellers hawk their wares around the Eiffel Tower during the height of the summer season. Hundreds more operate at the Louvre and Sacré-Cœur. In the past the police would show up and the sellers would scatter; now it seems as though they are allowed to stay as long as they don't become overly zealous in selling their knock-off trinkets. Police have been hindered by the inability of over-stretched courts to prosecute the wave of illegal sellers. When sellers are caught, their goods are confiscated but they are usually released because most are unable to pay their fine (which could be as much as 3750 euros). Even fewer are sent back to their home country.


These men are victims of others higher up. There is money to be made selling this merchandise for the gangs that control the sellers, yet it is the sellers who take the greatest risk. There is something wrong with this picture. France and the EU have dragged their heels on dealing with the issue of economic migrants. Nearly always exploited along the way, they face a difficult time transitioning into Europe without being further exploited and discriminated against once they land in an EU state.