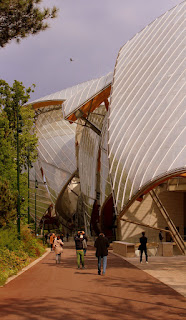 The newest museum in Paris opened on 27 October 2014 in a gala presentation of celebrity, art and politics. It has become another must-see-museum in Paris.

The structure, designed by the Canadian-born architect, Frank Gehry, rises from the edge of the Jardin d’Acclimatation in the Bois de Boulogne and it's well worth the visit for the building alone. The art works inside are shown on two levels in 11 galleries. Photography is not permitted.

There is a restaurant that is airy, pleasant and only mildly overpriced. The gift shop is elegant and features the usual stuff and some things exclusive to the LVMH Moët Hennessy • Louis Vuitton Group. And expensive.

The building is amazing to behold. Its appearance has been described as whale-like as one approaches it through the green space of Bois de Boulogne.

It might also remind one of the petals of a flower. Others suggest the form of a sailboat's sails inflated by the wind. Or an iceberg. It looks like a whale leaping out of the water to me.

The use of water, straight lines, curves and an art installation of yellow glass and mirrors on the lower level is both thought-provoking and fun. The building has to be viewed from all sides. 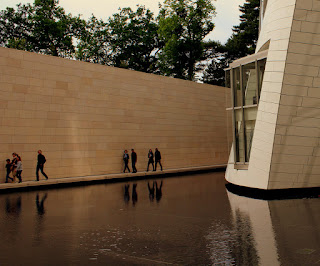 The building was not without its controversy. The City of Paris owns the land and granted a building permit in 2007. Various citizens' groups opposed the building of a private museum on public land for a variety of reasons and launched a court action, which they ultimately won.

Renowned French architect Jean Nouvel spoke out in favour of the project, saying of the detractors:

"With their little tight-fitting suits, they want to put Paris in formalin. It's quite pathetic."

His suggestion that the protesting groups would preserve Paris in formaldehyde made an impact, though in the end it took the Assemblée Nationale to write and pass a special law saying the Fondation was in the national interest and "a major work of art for the whole world," to allow the project to continue. 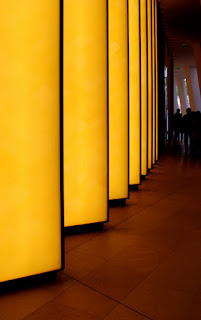 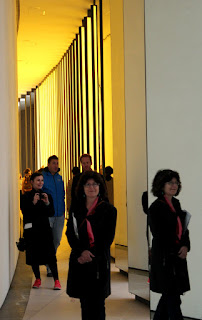 The collection of art works was impressive as and the special presentation Keys to a passion, presenting works by Francis Bacon, Pierre Bonnard, Mark Rothko, Henri Matisse, Claude Monet, Edward Munch (The Scream) and Pablo Picasso, among others, was outstanding.

The Fondation is a popular museum. One should be prepared to wait. Once inside, the flow of patrons is a bit confused, though these are early days in this major work of art for the whole world.