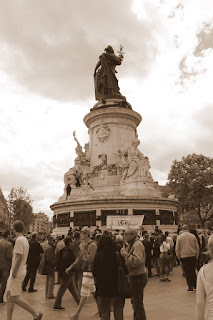 Place de la République is a square in Paris, located on the border between the 3rd, 10th and 11th arrondissements. The great monument, devoted to the Third Republic, was placed here in 1883. 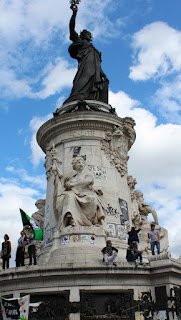 République has always been a gathering place for political dissent. It is also the place in Paris where large crowds gathered after the Charlie Hebdo and HyperCacher shootings in January of this year. 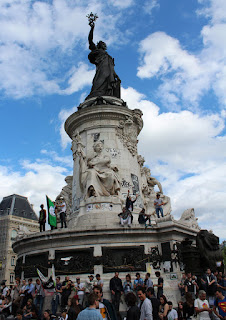 We stumbled upon Place de la République after leaving the tranquillity of Canal Saint-Martin. A loud crowd was present in the plaza, young men were swinging from the monument and music blared from speakers. At first Jeem thought they were some of the political comrades he had befriended earlier; they being members and adherents of a raucous anti-capitalistic collective. As it turned out, this rally was not that kind of political action. No, this was a rally to smoke pot, listen to music and promote the legalisation of cannabis. 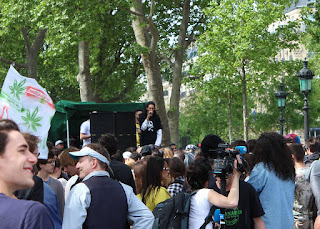 In another part of the plaza, a smaller group of young men and women were handing out red roses to visitors. Sherry engaged one young fellow in conversation, wondering what they were doing and why. This is another case where a better understanding of the French language would have been helpful. 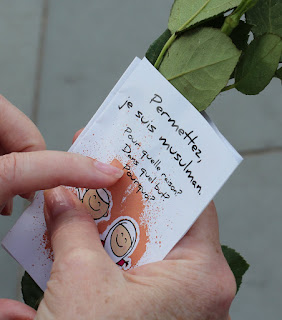 However. We did learn that the group were les musulmans and their goal was to promote understanding about Islam. Musulman is a somewhat common term, dating hundreds of years, and ascribed to followers of the Islamic faith. In the Nazi death camps, the German word musulmann was applied derogatorily to those suffering from starvation.


Les musulmans were handing out roses today and attempting to counter the image they feel the media creates of French Muslims being supporters of terrorism. 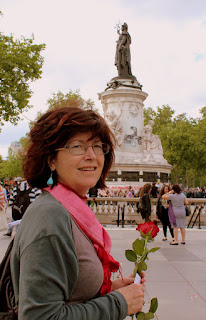 Due to a law dating from 1872, the French Republic prohibits performing census by making any distinction between its citizens regarding their race, ethnicity or beliefs, which creates all kinds of problems for social planners and demographers. Through polling, which is not illegal, it is widely accepted that about 10 percent of the French population identify in some way with the Islamic faith.

The act of handing out roses made its gentle impact and reminded us of how important simple conversation can be in understanding each other, and ourselves.

As for Jeem, when Sherry looked for him, she found he was being detained by police yet again, this time only briefly. Something to do with the anti-capitalist pamphlets he was handing out. He promised not to do that again.