Walking around la Basilique du Sacré-Cœur and the money changers 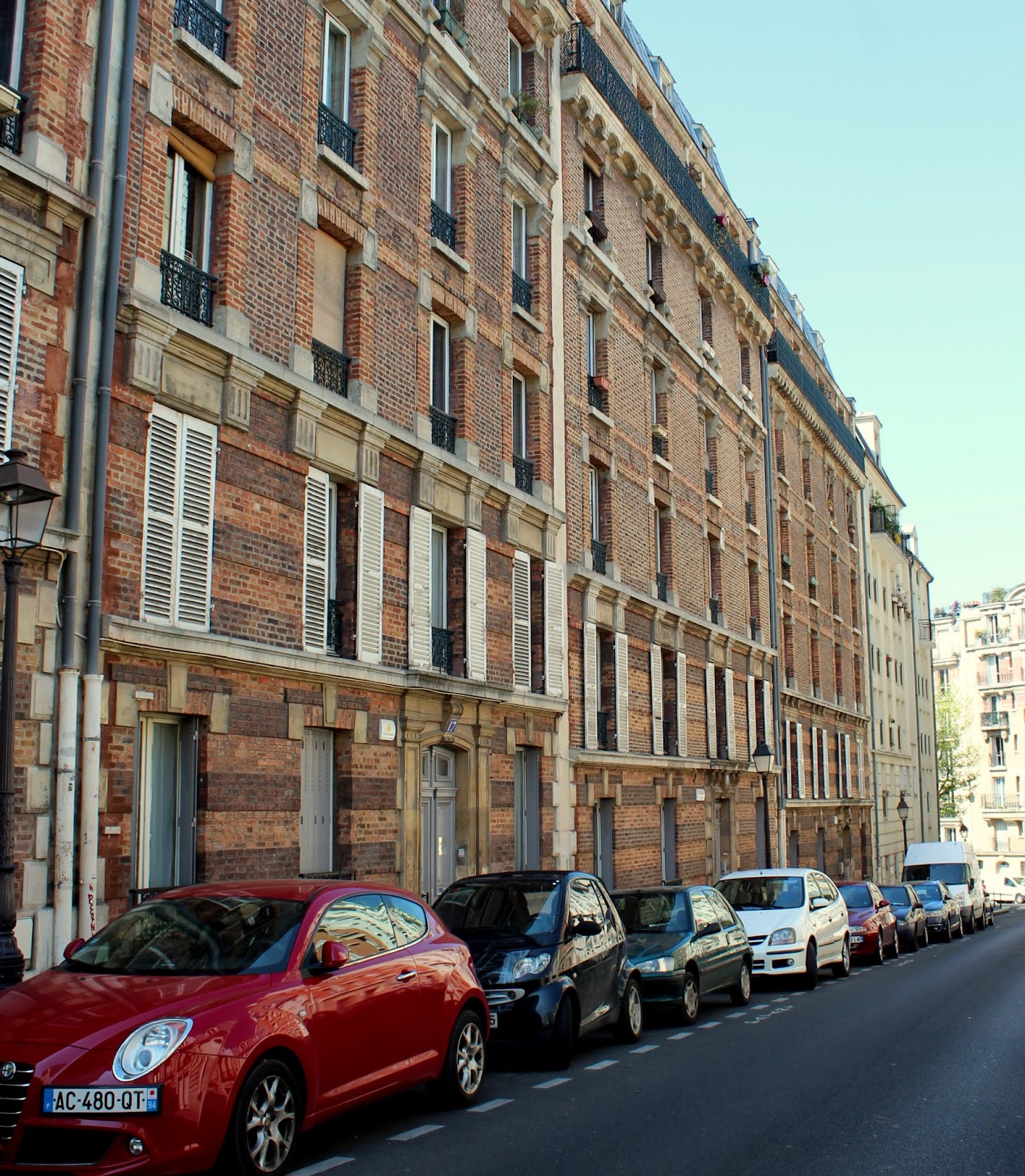 La Basilique du Sacré-Cœur, or simply, Sacré-Cœur, is a Roman Catholic church and basilica. It is a major landmark and tourist destination, located at the summit of butte Montmartre, the highest point in Paris. It is also an easy walk from our apartment on rue Marcadet.

Our apartment is located in a decidedly residential area, and while a few tourists stumble through the area, for the most part, we are among locals. In and around Sacré-Cœur is the complete opposite. We took a less-travelled path to Sacré-Cœur, around the back and along the side, and what a difference a block or two can make in avoiding the crowds, which are large, even at this time of year and on a weekday.

The side streets are narrow, the stairs can be steep, and once in a while a glimpse of Sacré-Cœur can be seen, so you know you are heading in the right direction. 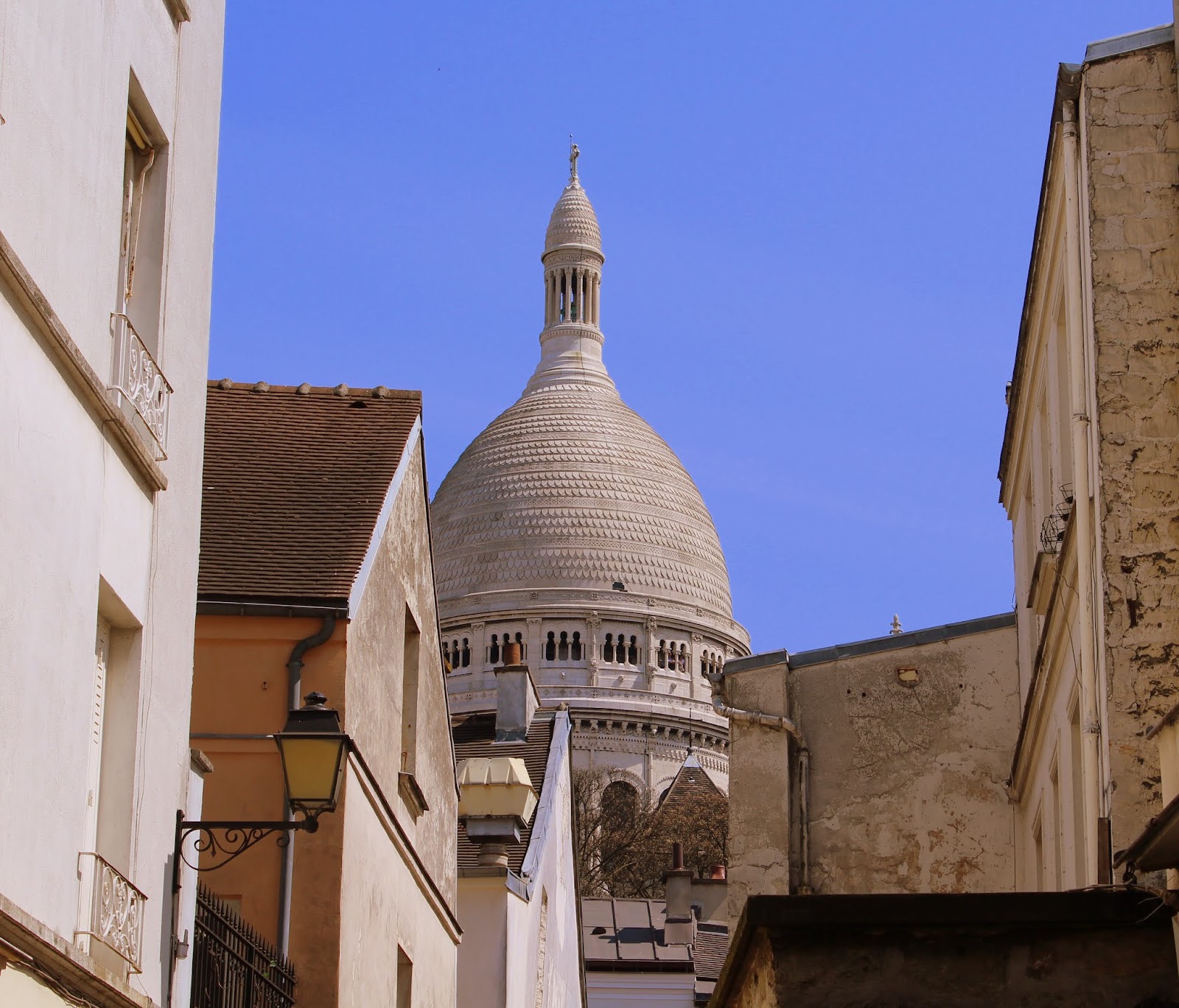 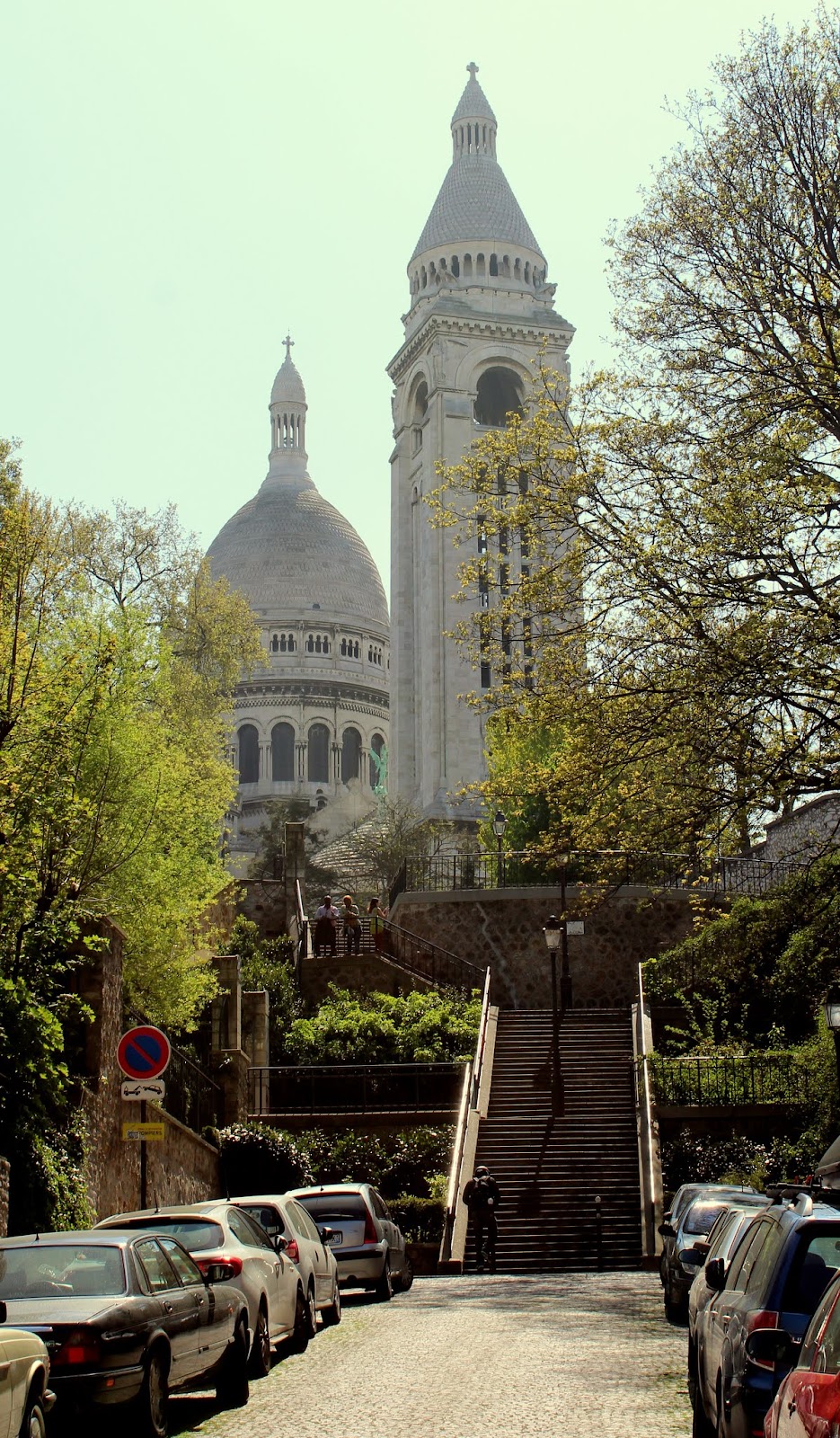 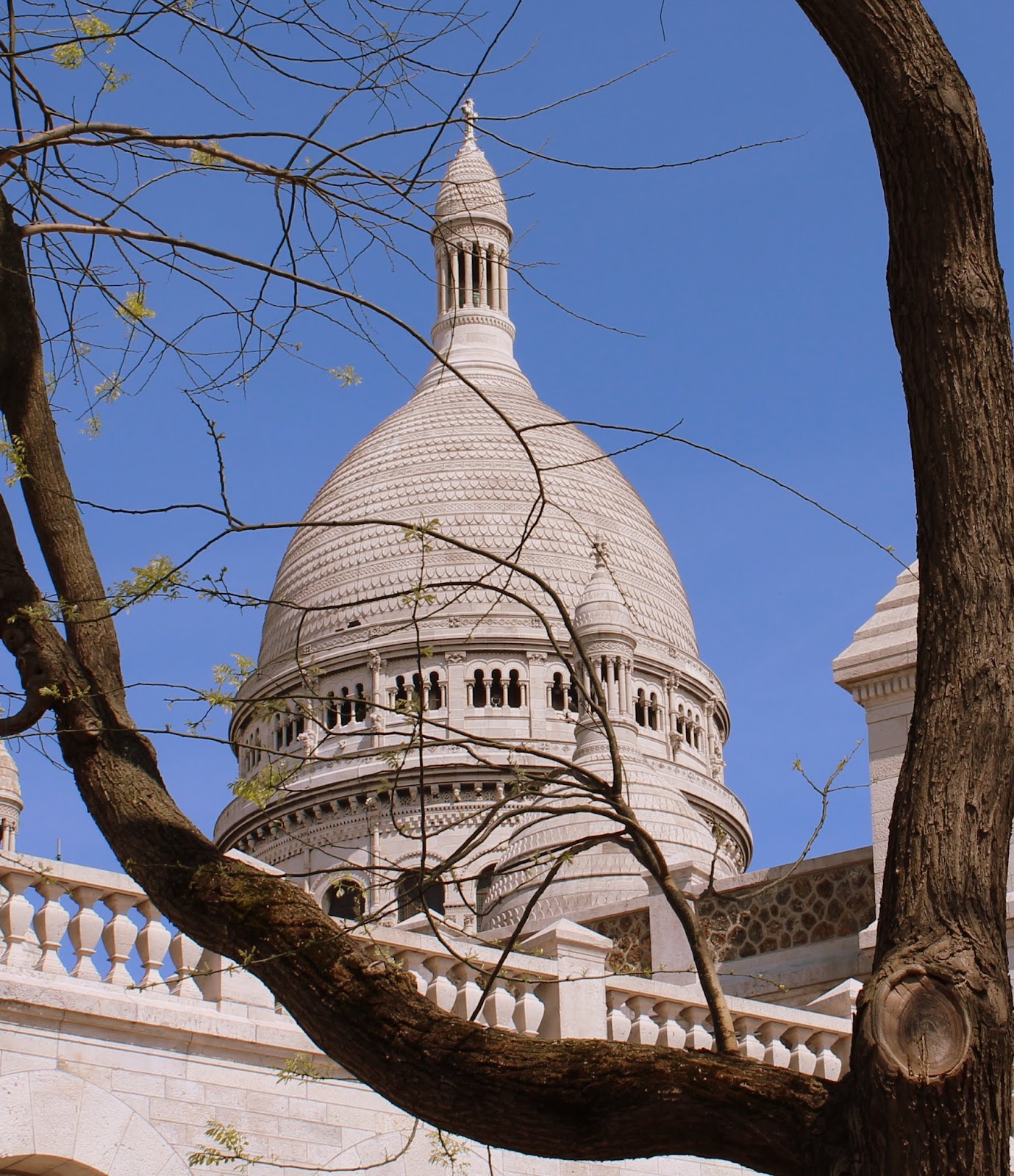 Sacré-Cœur is considered a double monument of sorts, both cultural, or religious depending on your perspective, and political. It is recognised as a national penance for the defeat of France in the Franco-Prussian War. It is also seen a monument of conservative moral order in the destruction of the socialist Paris Commune in 1871. However, the official line from the Church is that the building of the basilica has nothing to do with the Commune, and it goes to great lengths to dispel the notion. I'm not convinced either way. It is a significant symbol of the power of the national state and what was, at the time, the national church. The announcement of fund-raising to construct Sacré-Cœur, began with a speech by a Bishop Fournier attributing the defeat of France to divine punishment after "a century of moral decline" since the Revolution.


The Sacré-Cœur Basilica was designed by Paul Abadie. Construction began in 1875 and was finished in 1914. It was consecrated after the end of World War I in 1919. 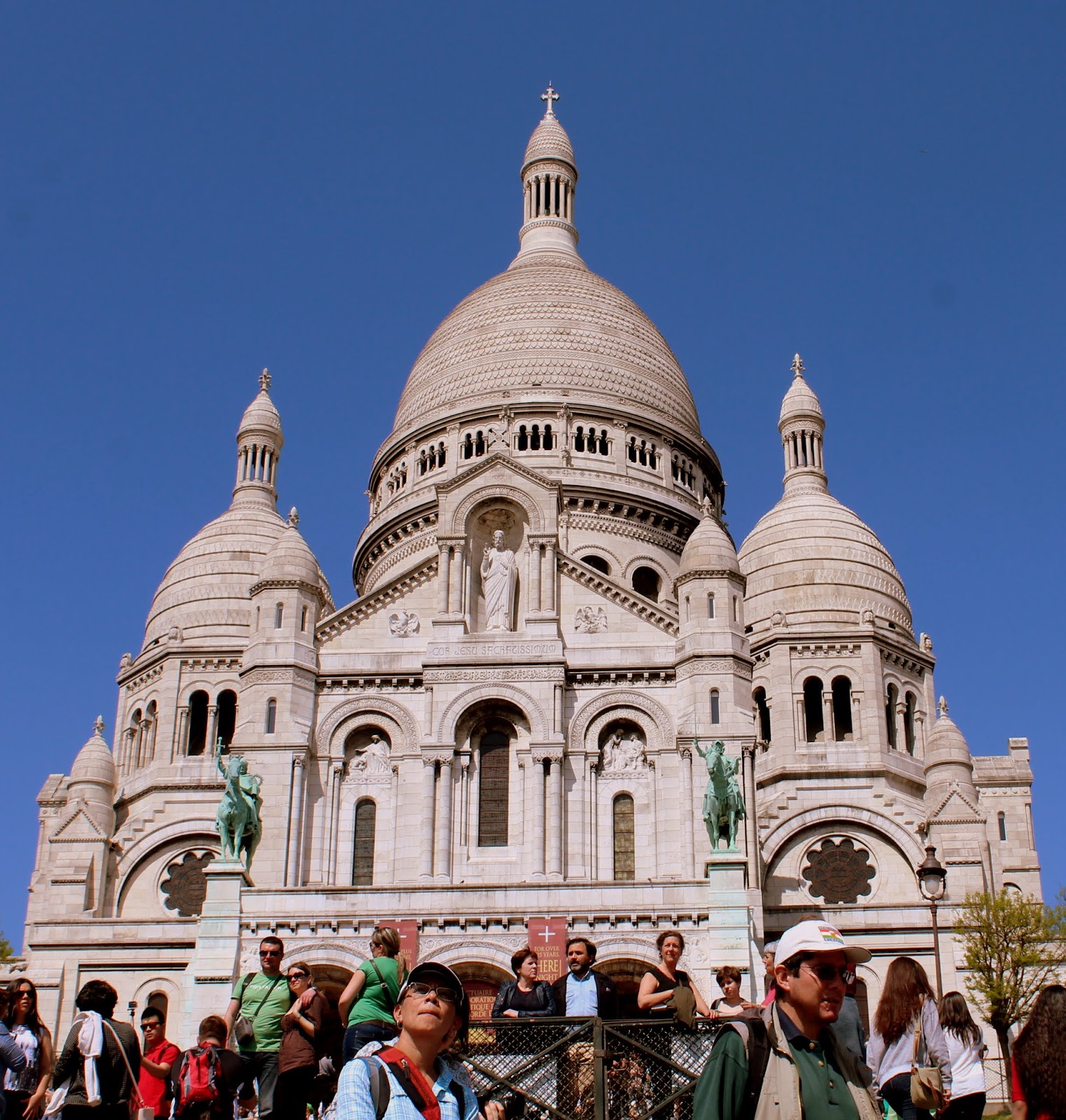 Today there are all kinds of people selling things at Sacré-Cœur. Underpaid and overworked immigrants selling cheap trinkets, baubles and beads. Another group in tents selling "hot dogs" and falafels. The church itself gets into the act with donation signs and boxes prominently displayed most everywhere. Everything it seems has a price. I came away wondering, how a certain young itinerant rabbi would react to such a display; the one who overturned the tables of the money changers in the temple just before Passover.


Sacré-Cœur is not something to be missed. Indeed, I've made the trek on every visit to Paris, and I will again before we leave. It is a special place with fantastic views especially at sunrise and sunset. This time, coming up the back way, and leaving by the side, was better somehow. The crowds, and the money changers, will await, no matter how you get there. The journey makes a difference.