Charlie Hebdo and the HyperCacher

Going to the scenes of terrorist attacks is not a tourist-thing to do. Yet, where were these places that figured so prominently in our news of only a few months ago?

We know the story about Charlie Hebdo.

At 11:30 on Wednesday morning, 7 January 2015, a black Citroen drove up to the building housing the offices of  Charlie Hebdo in rue Nicolas-Appert. Two masked gunmen, dressed in black and armed with Kalashnikov assault rifles got out and approached the offices.

They burst into number 6, Rue Nicolas-Appert, before realising they had the wrong address. The two then moved down the street to number 10 where Charlie Hebdo is located on the second floor. 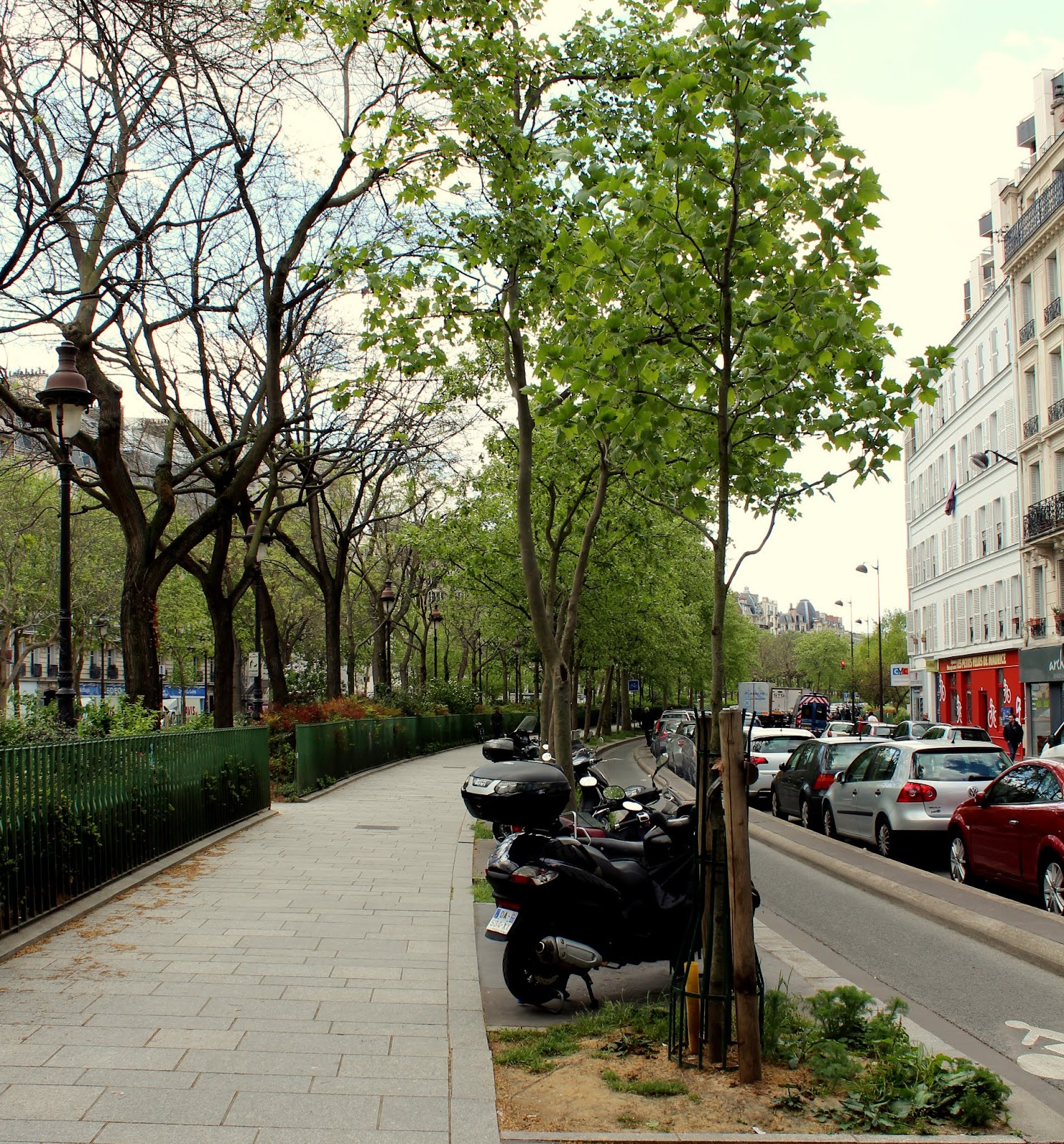 The gunmen killed 11 people and injured 11 others in the building. After leaving, they killed a French National Police officer outside the building. Several related attacks followed outside Paris, where another 5 people were killed and 11 wounded. 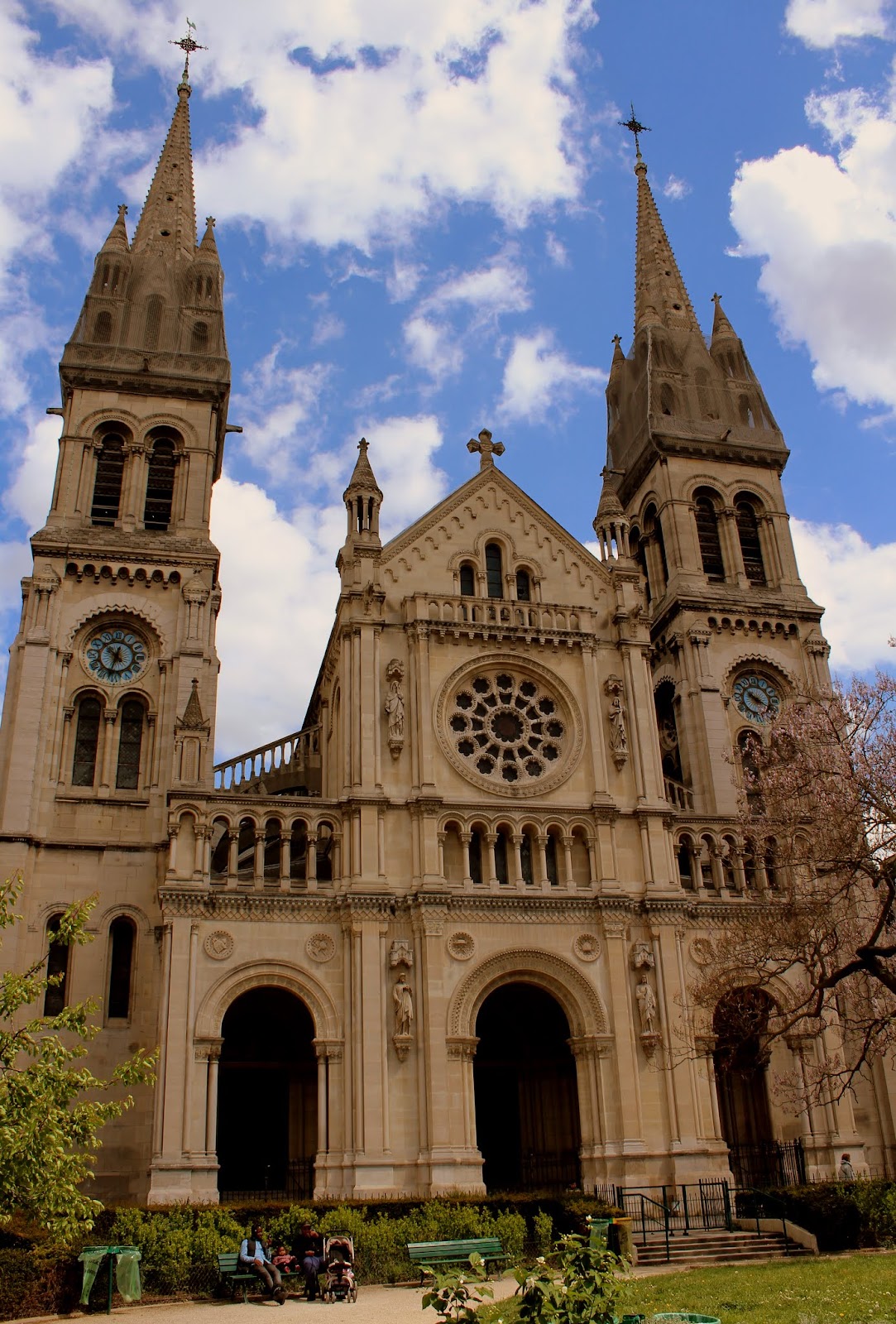 It was easy to come to the neighbourhood by Metro, and the area appears to be an extension of China Town with new clothing stores and the Mandarin language heard more often than anywhere else I've been in Paris. It's also on the limits of the Marais, with its fashionable merchants, cool coffee shops and artsy bistros. The church yard near the Metro appeared to be filled with homeless people. It's an interesting neighbourhood. 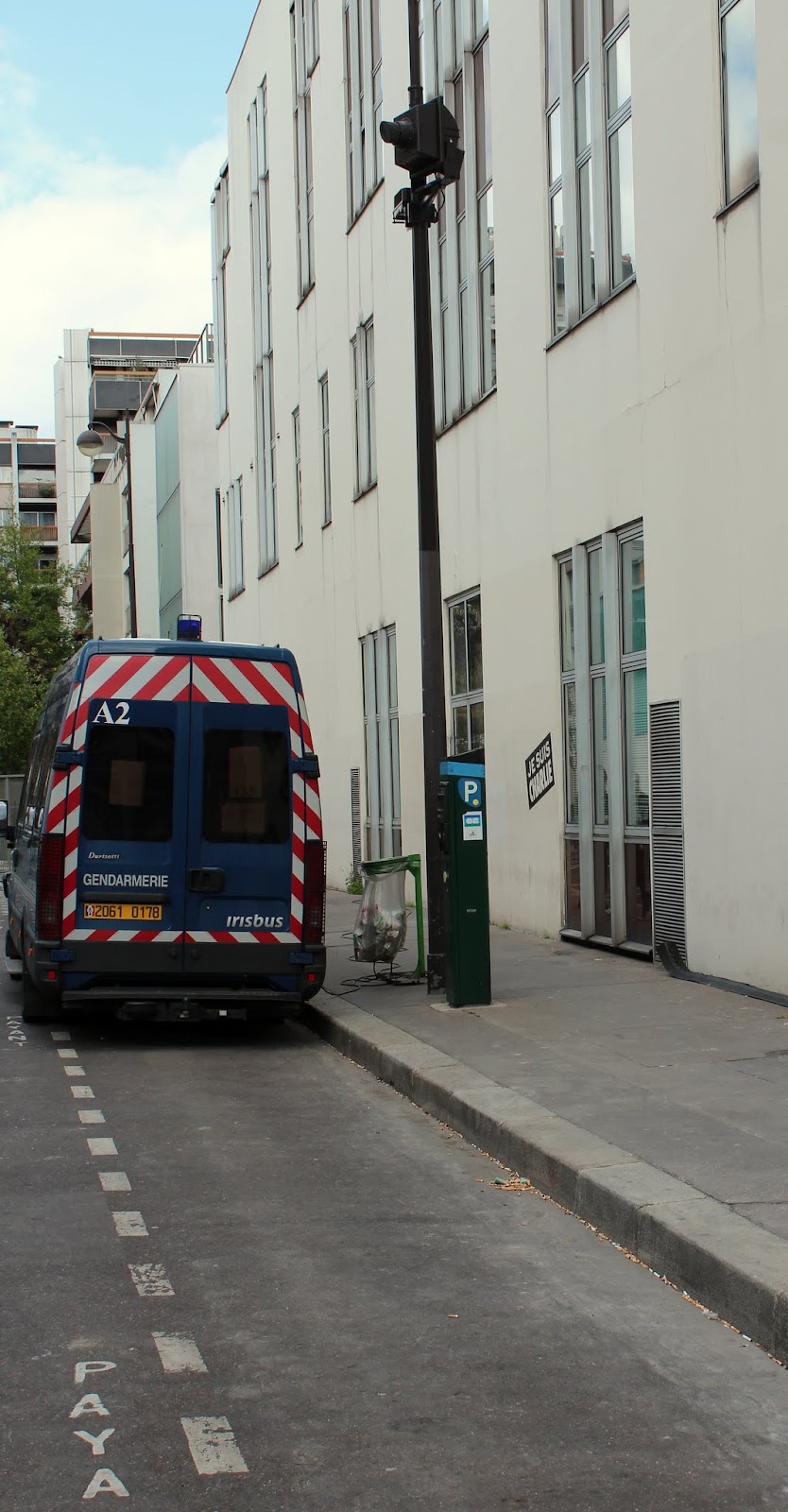 Rue Nicolas-Appert appears on maps, and it seems simple enough to navigate, but it's a short little back street of sorts, and found only by meandering through another dead-end street to a lane-way, that finally leads to Nicolas-Appert.  Or so it appeared to me... it took a while to find. 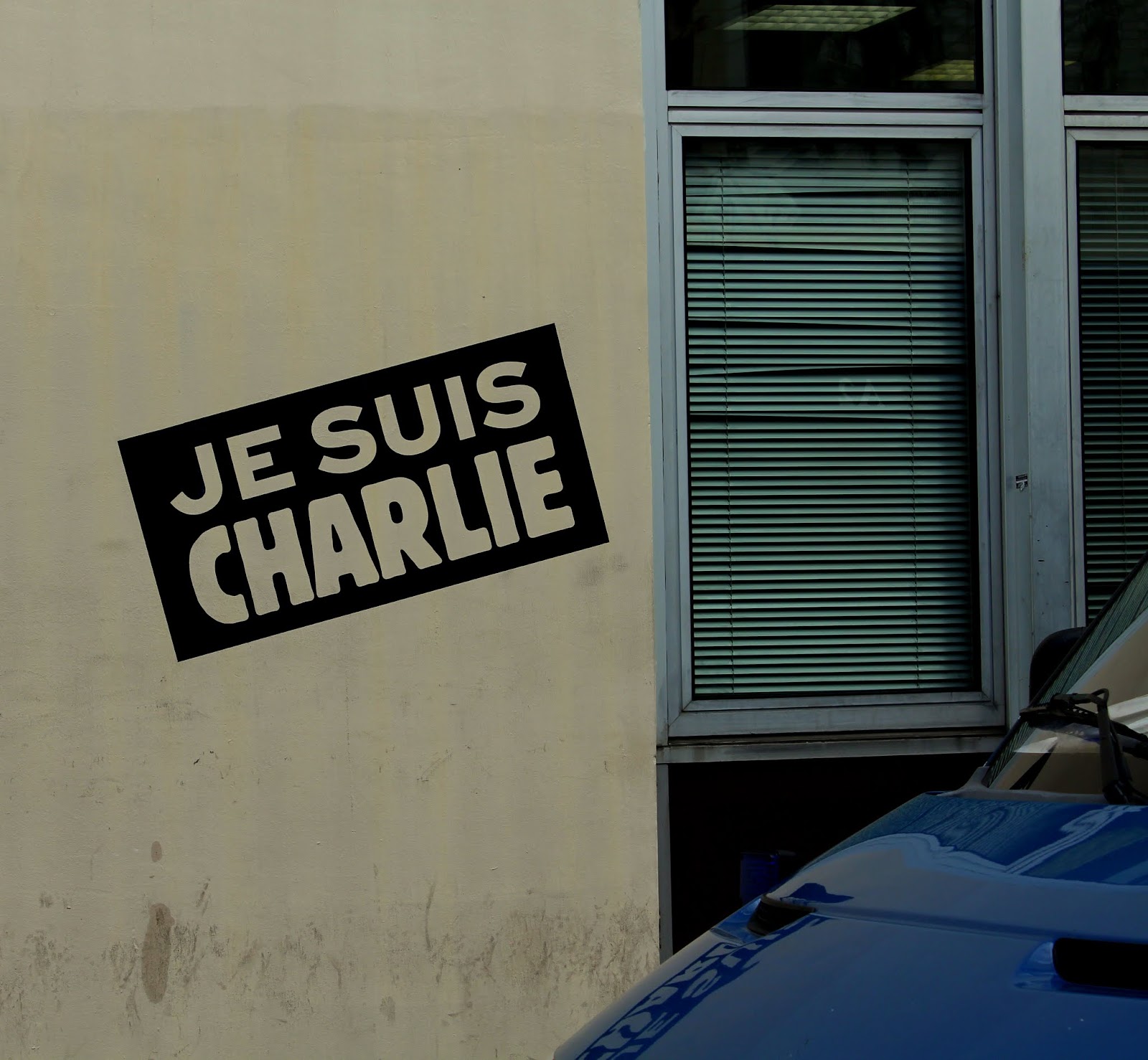 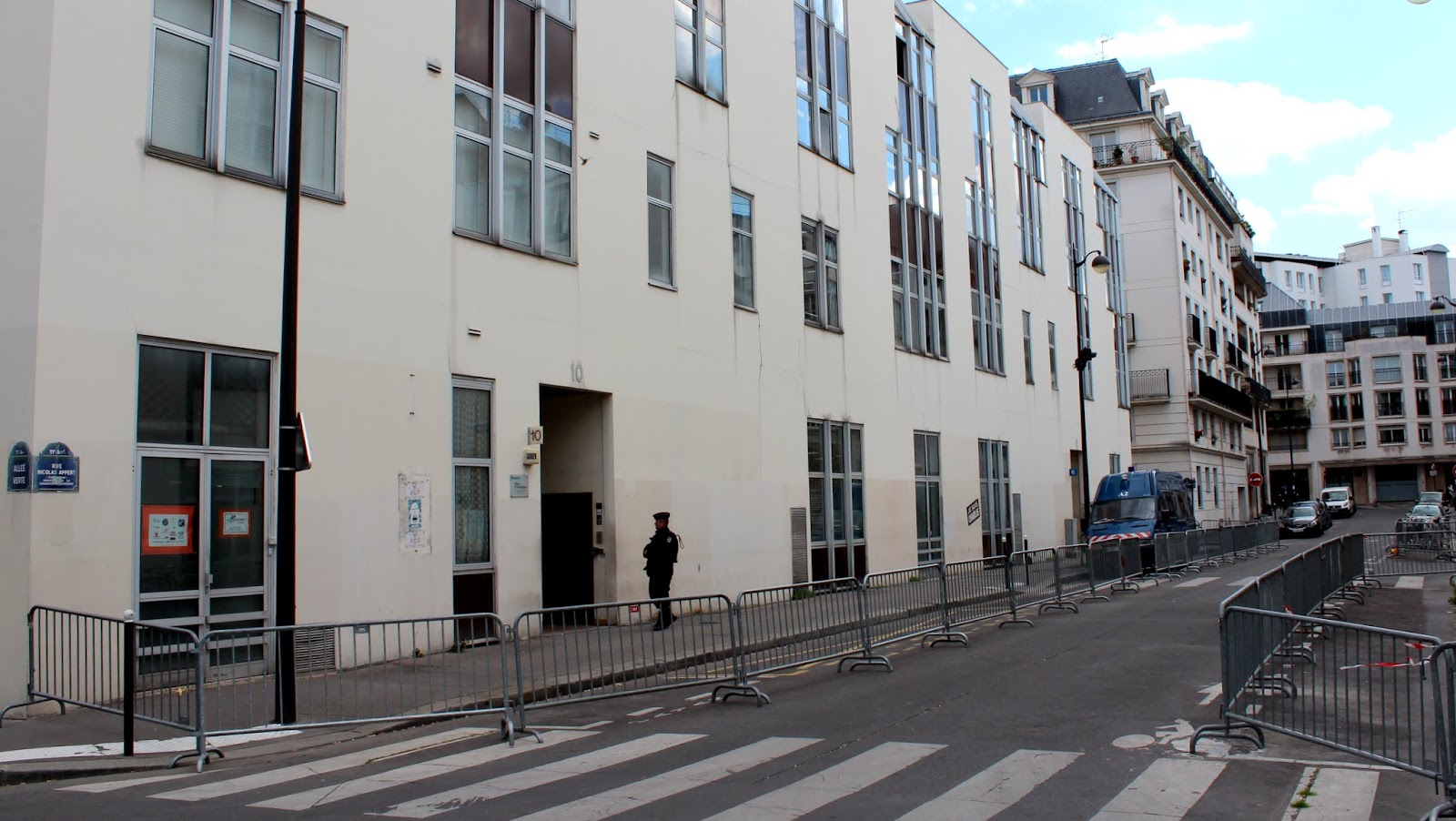 At the address, there is little to identify the building in any way with the magazine, though there are now several prints on the concrete walls, and heavily armed National Police patrolling the street every day and all day. They are not keen on photos being taken of the building nor of themselves. There are barricades on both sides of the narrow street. 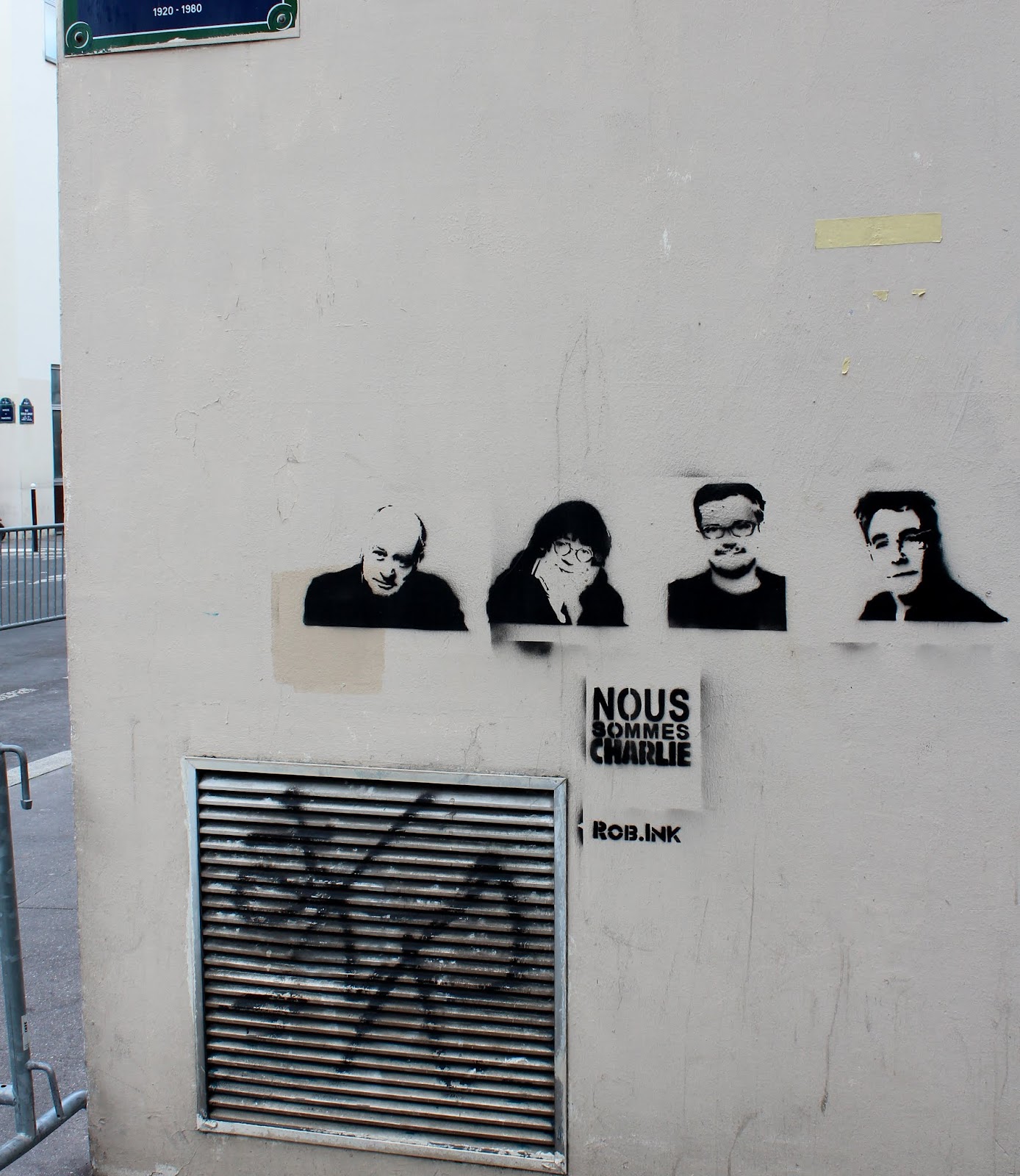 While I lingered at Charlie Hebdo a man appeared with a little boy. The man held the hand of his son and when they came to the front of number 10 rue Nicolas-Appert the man acknowledged me by nodding and asking what I think was "Is this the place?" I answered softly. The man knelt down and talked quietly to his son about what had happened and why it was important to have come today. Then, the two joined hands and walked away, both looking back with tears in their eyes as they turned the corner.


The HyperCacher story is well known too. HyperCacher is a small supermarket chain that features Kosher products. The chain operates in France and Italy.

On Friday, 9 January 2015, a man, armed with a submachine gun, an assault rifle, and two handguns, entered the HyperCacher supermarket at Porte de Vincennes in the 20e arrondisement of Paris. He killed 4 people, all Jews, then took several hostages. A day earlier the same man had killed a Municipal Police officer. 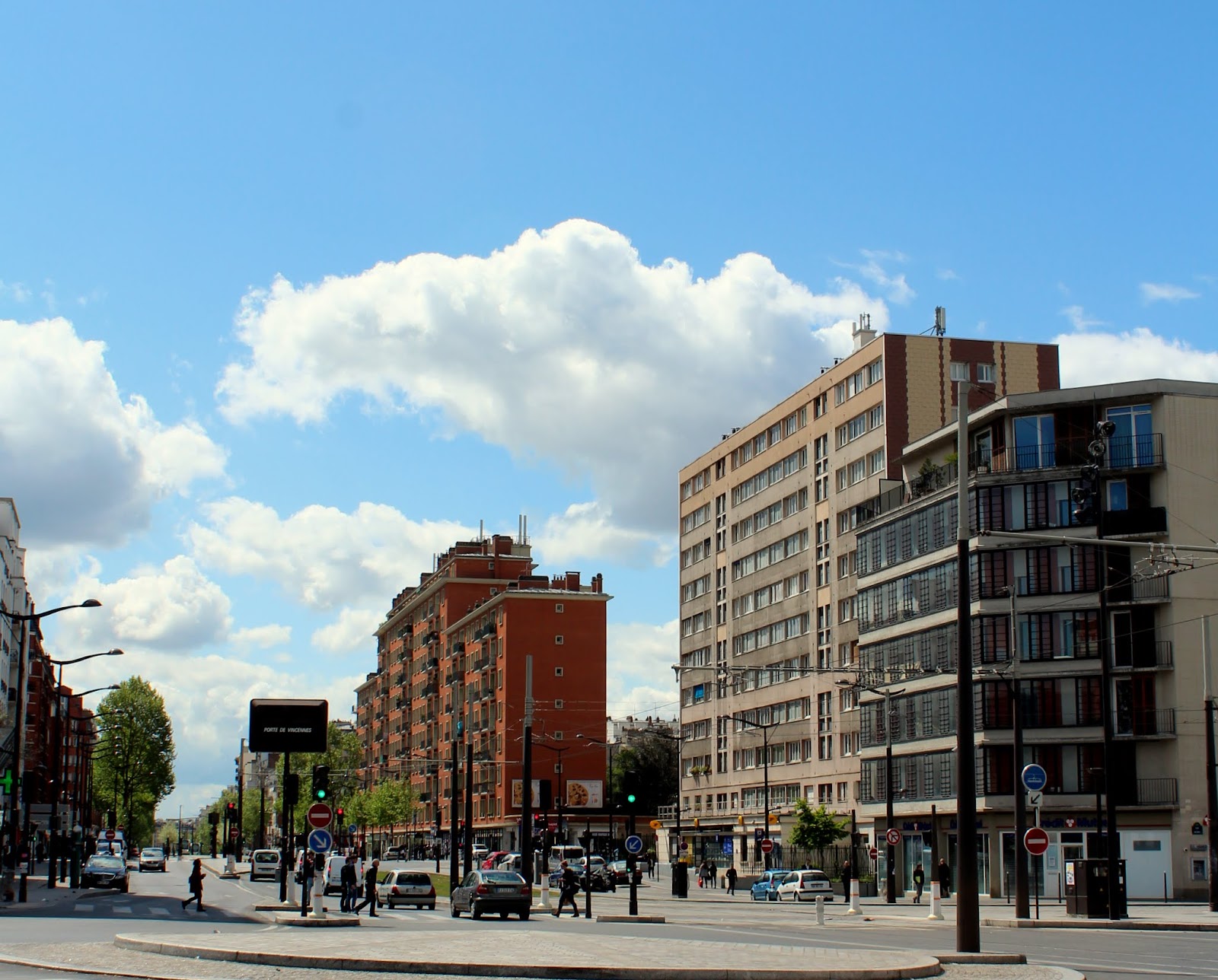 The HyperCacher was much easier to find than Charlie Hebdo. In fact it's down the street from a Metro stop. It's a bit on the outside of central Paris and the buildings are slightly newer, and generally less iconic than what we see in other parts of the city. The grocery store is found just on the other side of the Boulevard Périphérique, a major highway that literally rings the city. One of the busiest roads in Europe, the Périphérique is often considered the boundary between the city of Paris proper and its suburbs. 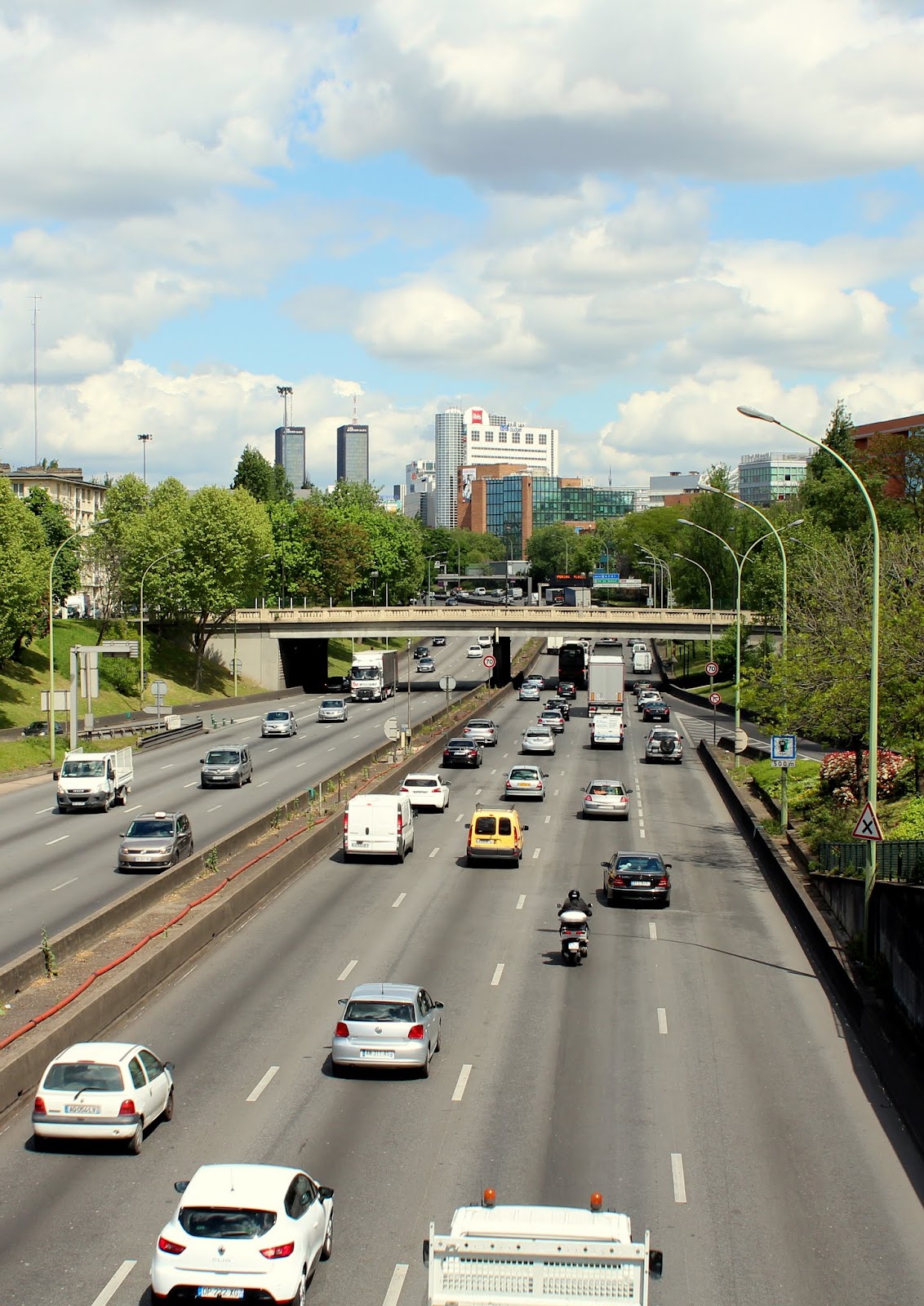 Like the street at Charlie Hebdo, this is a depressing place. The barricades are here too, and must be a deterrent to business. There are many candles littering the sidewalk in front of the store, and many more bunches of dried up and rotting flowers left long ago, and I wonder why the mess hasn't been cleared. 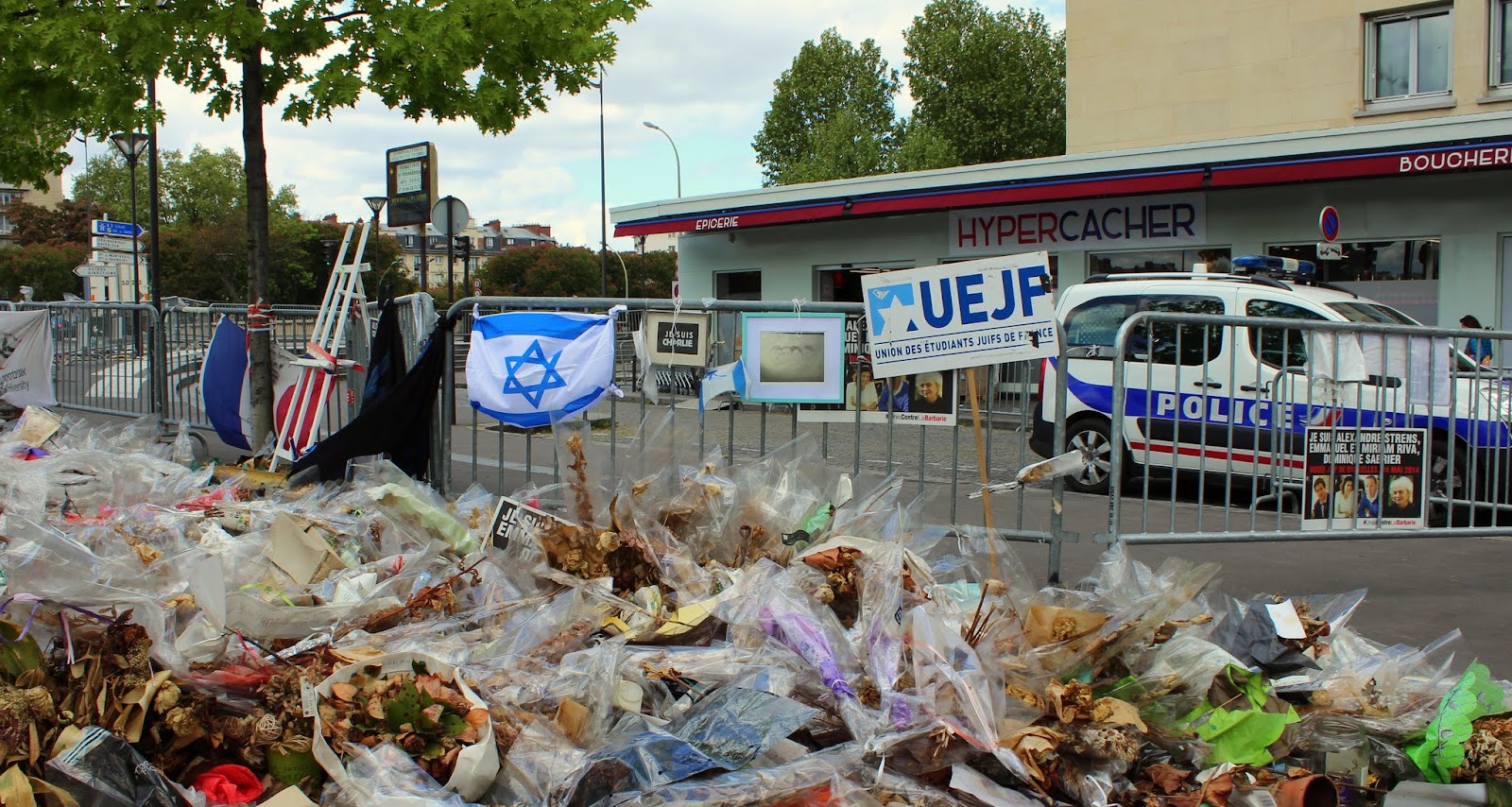 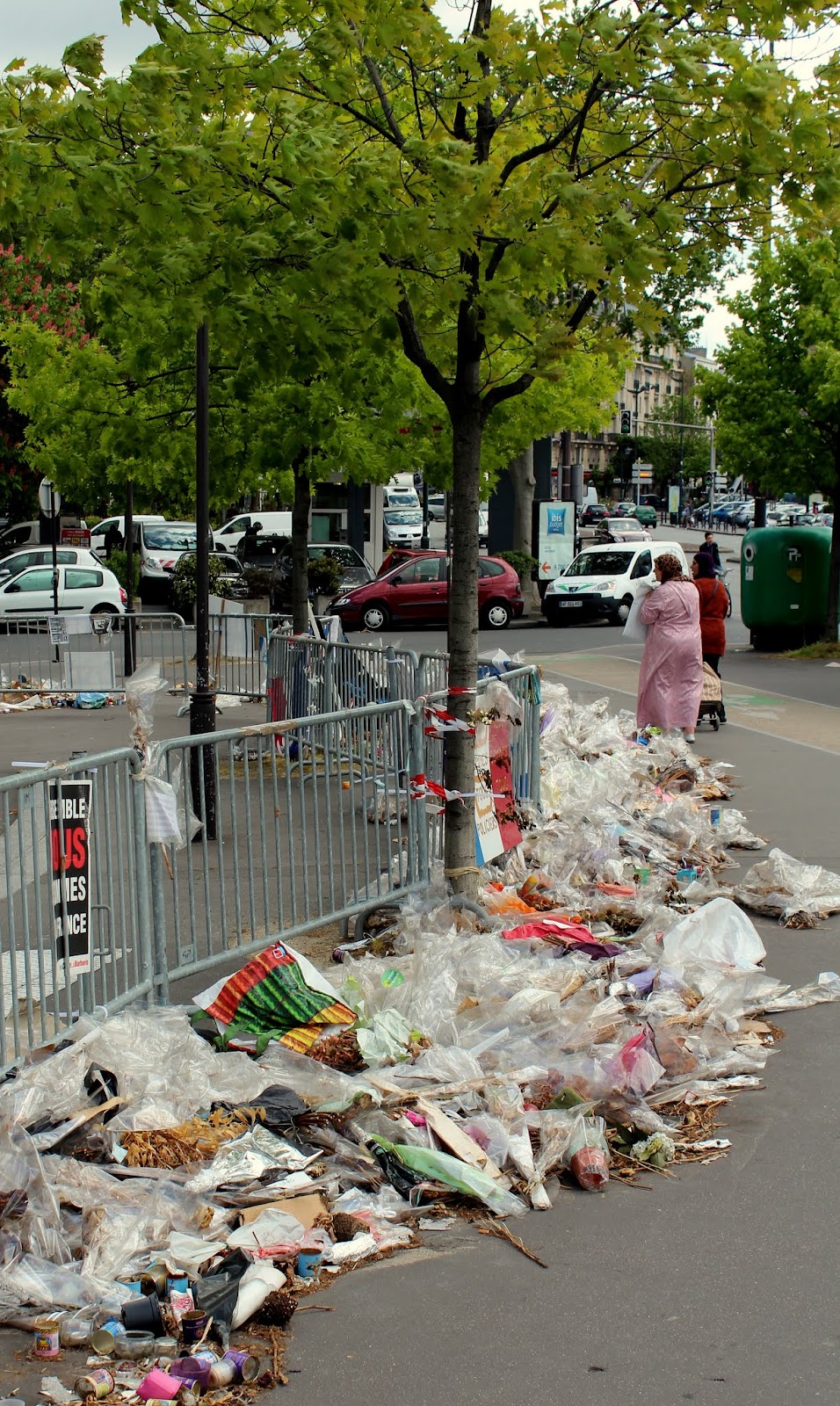 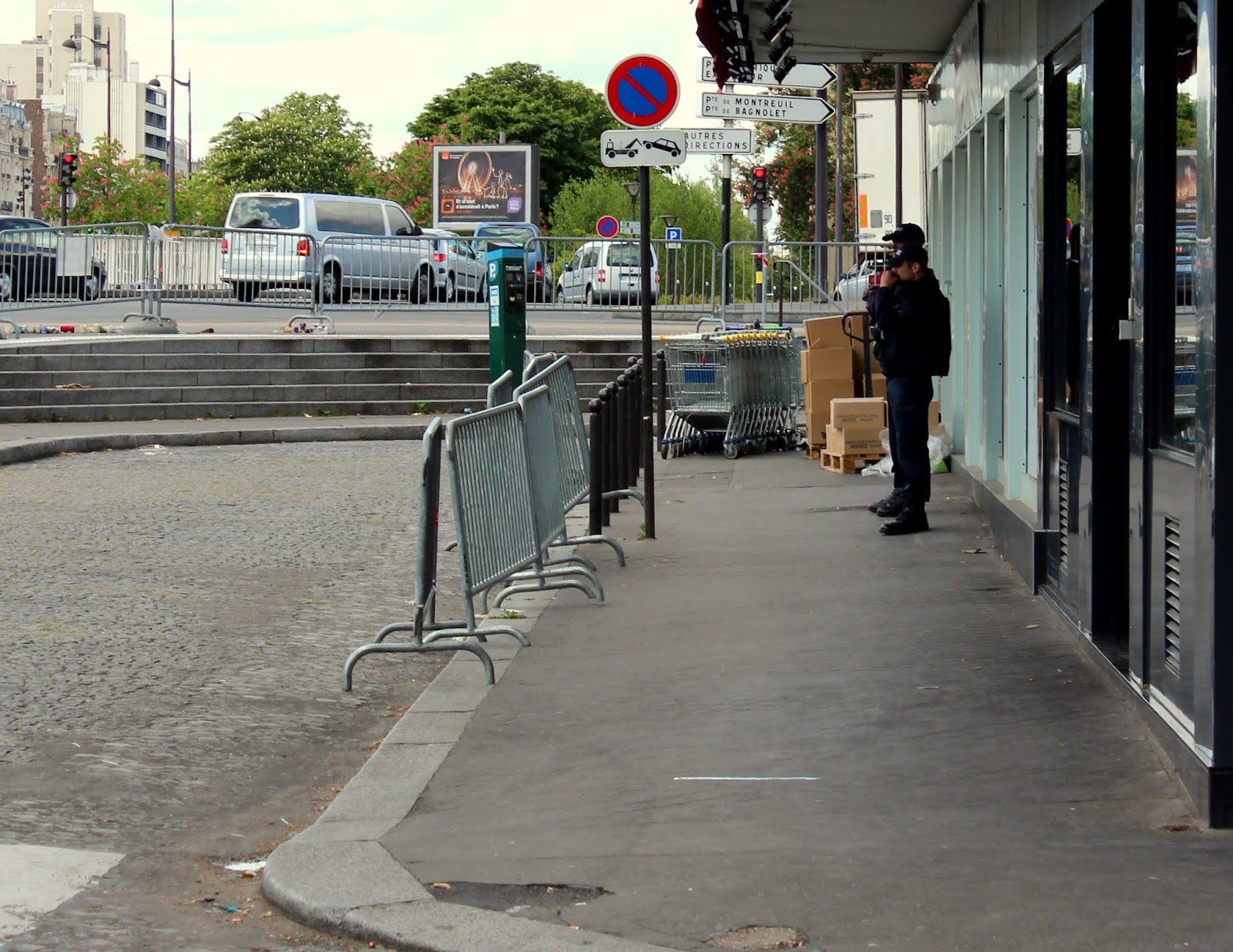 The police presence is slightly more subdued here than at Charlie Hebdo. Instead of machine guns toted by National Police, the two officers here are from a municipal force and they carry only side arms. They watch me as I walk back and forth in front of the store, but we acknowledge each other politely when I walk past them to enter the HyperCacher. 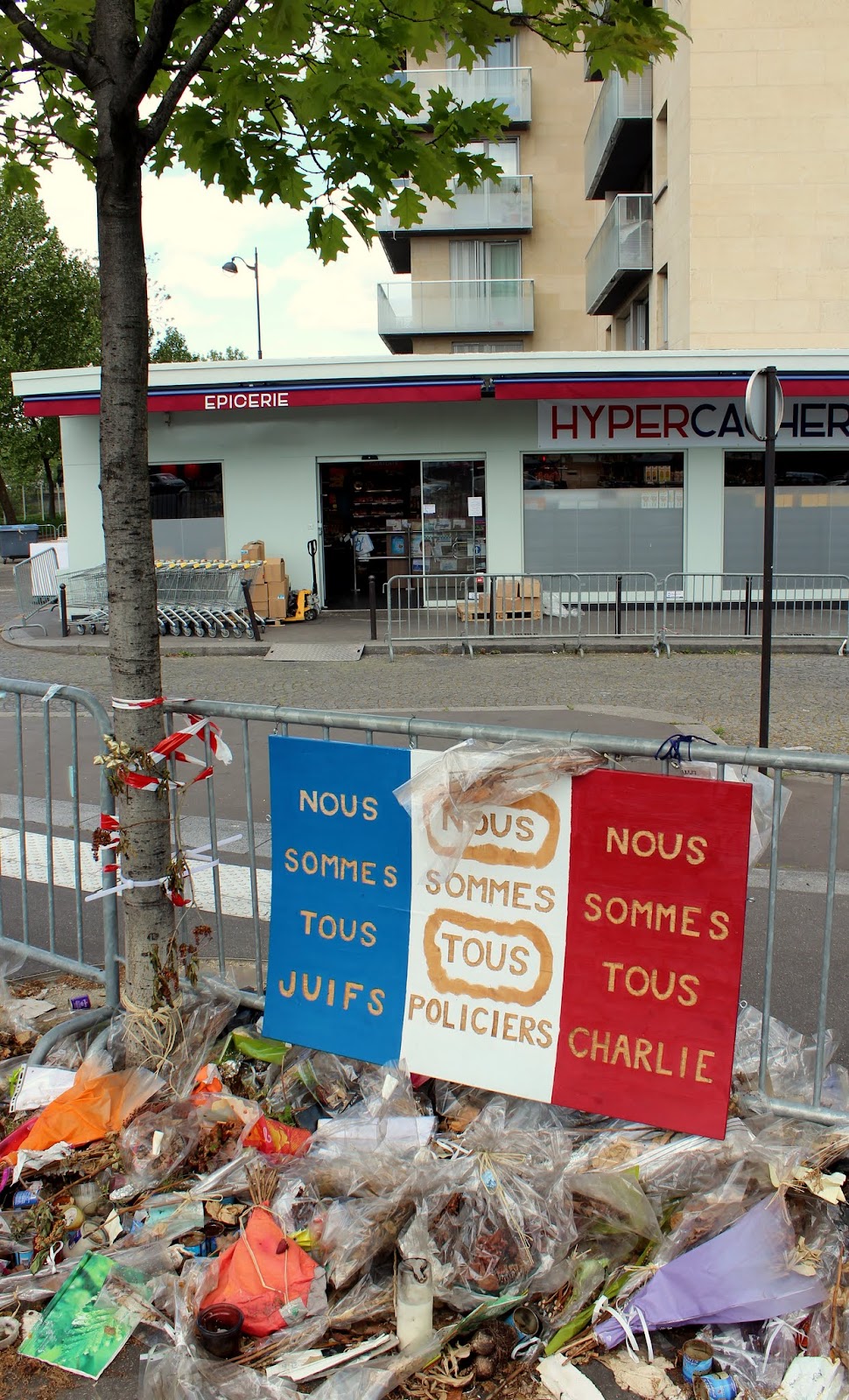 Inside, the store is subdued. There isn't the usual supermarket music playing and there aren't many staff and certainly not many customers. Perhaps it gets busier at other times though I assume the attack has not been good for business. I wander the aisles of the smallish store, and linger for some time in the wine department. There are many wines from Israel, France and Italy, and I am impressed to see a number of recognisable-even-to-me French wines that are Kosher. I didn't know. 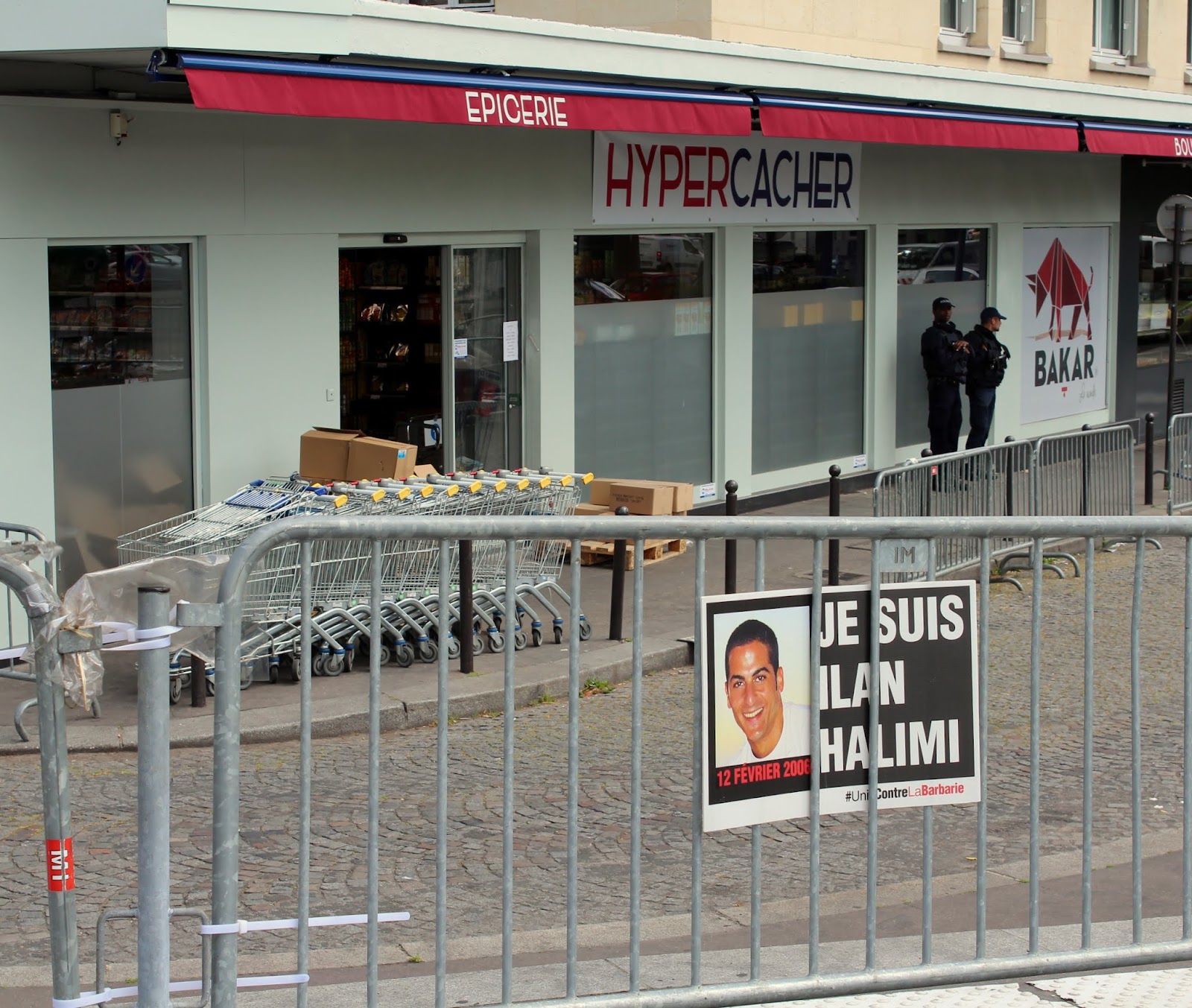 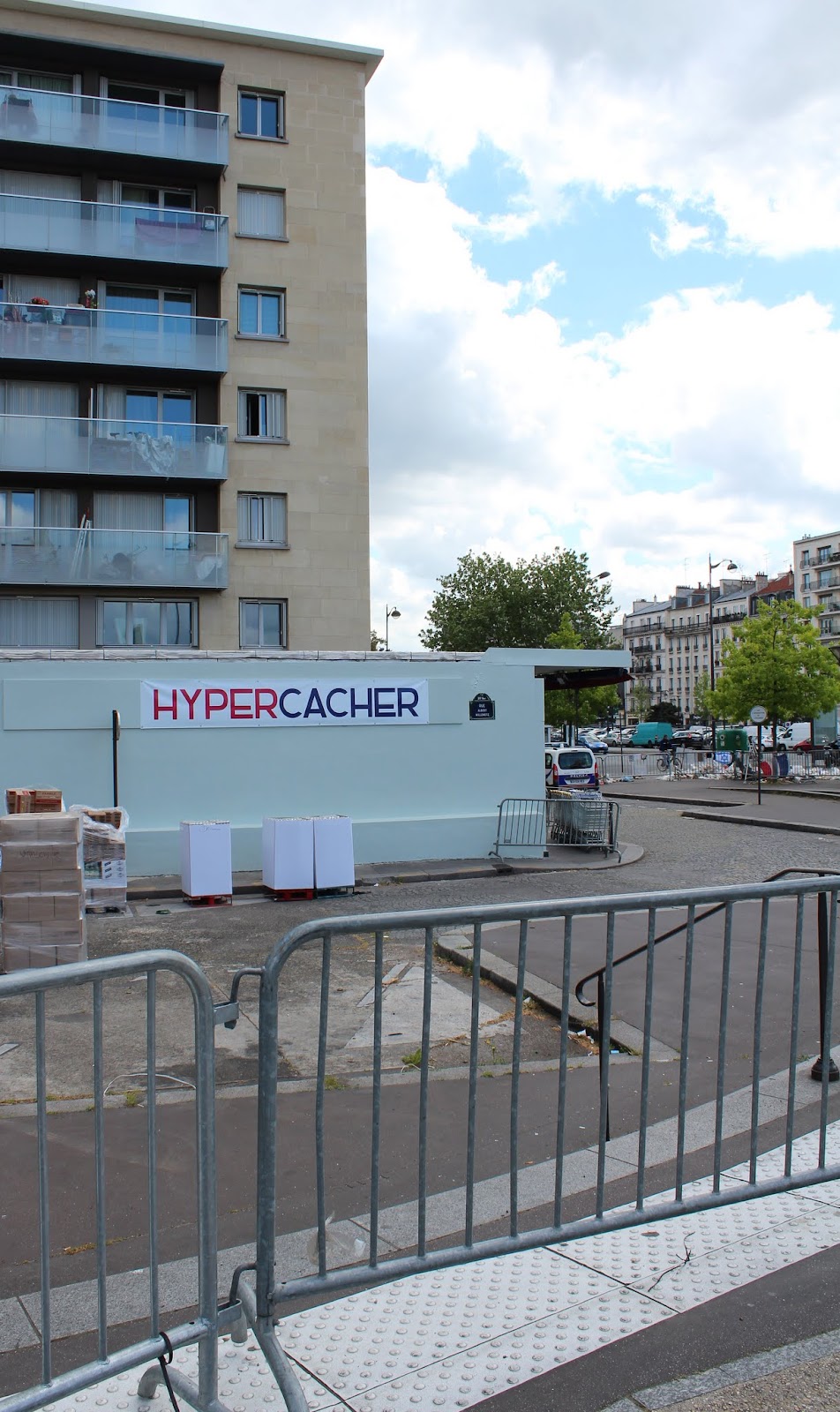 As I walked through the store I imagined the horrific events of that day in January. And I thought about the route to the basement of the store, to the cold locker, where an employee of the supermarket, and a Muslim, Lassana Bathily, helped hide 15 hostages. He then managed to escape in an attempt to get help for the people in the basement, whereupon he was immediately arrested and only released after ninety minutes. Perhaps he is working here today.

Staff at the store paid me no interest, except to say hello. Several customers, both older citizens, were wary of my presence and uncomfortable. I am an outsider.


The two places are not on any tourist agenda, nor should they be. What happened here in January and how it shook this modern European state, will always be important to remember. Today in Paris armed police or military can be seen at virtually all synagogues and Jewish memorials. They are seen patrolling the streets around the Grande Mosquée de Paris and at Sacré-Cœur. Something terrible happened here in January, and no one is going to forget anytime soon.